Bowflex introduces SelectTech 560 which are the world’s first-ever smart dumbbells, that offer you a never forgetting experience of working out harder and smarter. The 3DT sensors provided by SelectTech 560 are a type of built brain which guides the users through the exercise by tracking their sets, reps, calories and providing them feedback. The compact design of SelectTech 560 reduces the need of thirty two traditional dumbbells into just two making them a perfect addition to home for workouts.By just twisting their wrist the users can adjust the weight. Also, they can track their daily workouts and achieved goals by using 3DT app on almos tany smart phone. By just syncing the app with Google Fit, MyFitnessPal or Apple health the user can get access to seventy preloaded workout videos.

A revolutionary kind of strength trainer is presented in Bowflex SelectTech dumbbells. Strength equipment are now connected with the web,Adjustable Dumbbells Review  while people considered cardio machines to be smart for years. With these dumbbells, you can keep a check on your weight, count reps, sets, plus you’ll be getting a video coaching app which will make your form more correct. 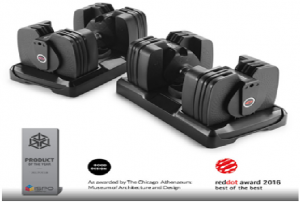 Bowflex SelectTech 560 adjustable dumbbell comes in a pair of two dumbbells which include a base plate. Base plate is necessary to change the weight of dumbbell. SelectTech 560 is more ofa squared shape instead of being round like the 552. The usage doesn’t offer much advantage than the previous version but its look and design is better. Also, thesliding of base plate is more easily done than in the rounded model one. Handles are made up of metal and every other component is made up of hard plastic. However, by looks the dumbbells doesn’t seem to look heavy duty but infact they are just like the SelectTech 552.

Even after using for several months the dumbbells will still look heavy and new. Dropping of weight on the plates isn’t really a big issue. Within the handle which is made up of heavy duty metal, all plastic parts are protected which leads you to no fear of getting damaged after a bit rough use.But,that doesn’t mean you can treat these dumbbells like the traditional dumbbells and start dropping them after every set, they are strong I agree but dropping very often may gradually reduce thelife span. The handle is designed to fit in your palms very easily and give you a natural feeling with a good tight grip. The handle is a bit thicker than the dumbbell which I prefer should be a bit thinner. The main change factor in SelectTech 560 is the addition of weight adjustment through handles. The 552 had a dial on the end which you were supposedto rotate to change the weight size, but in 560 you adjust the weight by turning the handle to left or right side adjusting both sides of plate at once. The weight must be on the base plate and from there you just have to grab the handle and there you go. Without even lifting your hand off from the handle you can adjust the weight by just few turns if it’s too heavy.

In workouts which require frequent adjustment of weight like in P90x, you will found this feature very supportive. It’s no doubt the easiest weight adjustment system by any dumbbells in the market. There is a display on top which shows the amount of weight in pounds or kilograms. So you can immediately see the new weight instead of counting or checking the number of plates. There is a minor issue regarding the display that it’s a bit small. The font of the numbers should be a bit bright like in white color and size of the screen should be a bit larger so it’s easier to see.

There is no problem of locking of weights in their place when you set them back down or in other words they catch the plates easily. One of the best factors of 560 model is that the weight range has increased from 52 lbs. to 60 lbs. Giving you eight more lbs. than 552 which is a big difference.As many experts criticized therange of 552 model so this issue was also resolved by increasing the total range. It consists of sixteen different weights starting from 5lbswith an increment of 2.5lbs. Adjustable Dumbbells Reviews 2017  per setting till 25lbsand from there 5lbs. increment is made which goes all the way to 60lbs. Doing P90x requires a great variety of weight range which can’t be found in regular dumbbells as it will require time to switch to them also it will occupy space making you feel congested and is not even budget friendly. So a single piece of adjustable dumbbell is recommended to perform such type of programs which I thing SelectTech 560 will offer because of its quickest weight adjustment system. The three dimensional trainer is one of thenew options in 560 that keep a track of your reps, sets, rep speed, amount of weight lifted and other cardiovascular activities. Rep speed management isn’t really suggested much but rep and sets counter are one next level things. 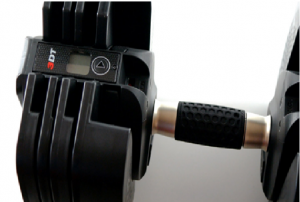 Bowflex SelectTech 560 Dumbbells carry the ability to develop the strength of any individual who’s a dedicated fitness lover. These dumbbells occupy very little space and eliminate the need of dozens of dumbbells in a paid gym. Also, the DVD coaches you throughout your exercise through videos which replaces the need of a personal trainer as well. Therefore, I suggest there must be an extend on warranty  of electronic parts but overall SelectTech 560 is highly recommended. Using SelectTech 552 for almost every suitable exercise and not bias to other dumbbells end up being worthy to me. If you are paying a heavy amount of money on a product which gives you maximum feasibility regarding weight adjustment and saves a lot of your home space than I think it’s a fairly safe deal.